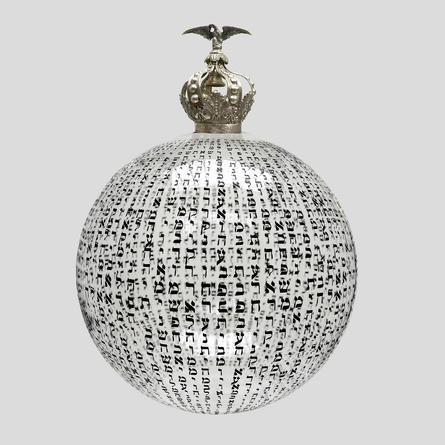 Aharoni’s artworks are characterized by an interest in exploring dualities, such as the intersection of religion and science, or the relationship between nature and architectural form. Many of his works take traditional objects or symbols—such as sacred texts or cultural artifacts—and subvert or synthesize them in ways that question their conventional context.

His artwork and art installations have been exhibited in New York and India, and are in private collections in the U.S., India and Europe. Aharoni’s solo museum exhibition, Missives, opened the fall 2013 season at the Dr. Bhau Daji Lad Museum (formerly The Victoria & Albert Museum) in Mumbai, India. In early 2012, Aharoni created a Hebrabic/Arabrew© script (a combination of the Hebrew and Arabic alphabets). In May of the same year, he was commissioned to create a large-scale art installation with the script, The Divine Domesticated, at the 14thStreet Y in Manhattan. Four panels from the installation were permanently installed that fall in the theater lobby of the Y.

In 2010, a permanent, site-specific installation of photographs from Aharoni’s Munnar Series, which capture the spontaneous patterns and vibrant topographies of Indian tea plantations, was commissioned for the lobby of a Manhattan landmark building. Aharoni's furniture designs and commissioned pieces are also in numerous private collections. His most recent design, the Jobim 276 coffee table, was introduced at the Collective Design Fair in New York in May of this year.

Since establishing his studio, Aharoni has also designed many architectural projects in New York—ranging from the DeKooning residence and a duplex penthouse in the West Village to a storefront studio/performance space in Williamsburg and the offices of an art law firm on 57th Street.

Prior to opening his own studio, Aharoni worked at several distinguished architectural firms including Polshek Partnership [now known as Ennead Architects] and Studio Daniel Libeskind. While at Polshek Partnership, he worked on the design for Carnegie Hall’s Zankel Hall; the space planning and design of The American Museum of Natural History’s subterranean entrance and public spaces; as well as the space planning of The New York Botanical Garden’s Museum Building.

His design work for Studio Daniel Libeskind included the competition submission for The Ground Zero World Trade Center Design Study, and the façade design for Hyundai Development Company, Seoul, Korea. In addition, Aharoni was on the winning design competition team with Zaha Hadid and Arata Isozaki for the building and urban planning of Milan, Italy's Fiera Convention Center.